“It’s a lot of playing but we love it, it gives us positive energy” 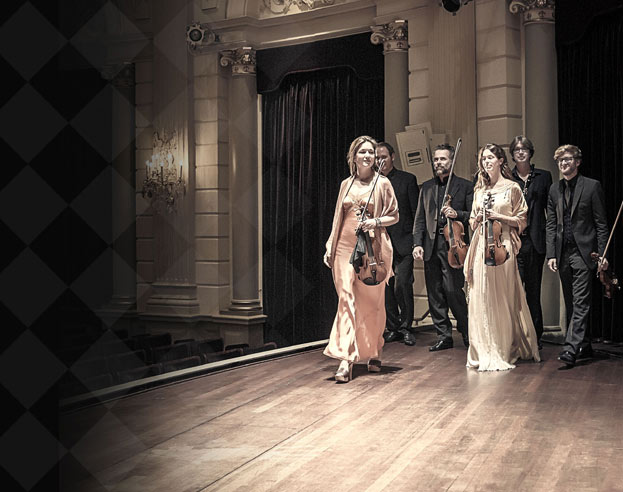 The Camerata was founded in 2009, all its members being from the Royal Concertgebouw Orchestra; how did the idea come about? Under what ideals? Did you find any facilities for its foundation?

Camerata RCO actually is a result from a nice idea to play some chamber music with colleagues of the orchestra in our summer holiday in Italy. In 2009, we were asked to play a concert in Festival Amfiteatrof in a beautiful church in the town we spend our family holidays. We ended up playing 3 concerts that summer and were with Italian management after that. It all happened by itself this way out of the wish to enjoy some chamber music. We all love our job in the orchestra and find it very special to play with the colleagues of the orchestra also in more intimate settings in the chamber music. And of course we are very lucky to live in this way also the incredibly beautiful repertoire of chamber music aside from all the symphonic works we get to play in the orchestra.

It is wonderful to get to know your colleagues in a different repertoire and spend as much time as you would like with it. We often think of Camerata RCO as a playground we founded for ourselves. We are able to choose the music and the players just like we wish.

What memories do you have of your first steps? Your first concerts?

The first rehearsal of our ensemble (the name Camerata RCO has only been used for the last 2 years) was open air, in front of our caravan on the camping side. We were in summer clothes and soon all our next door neighbours on the camping side gathered as a big crowd around us. They must have thought it was a strange thing! Haha

Your music ranges from Baroque to Contemporary, you also offer five monthly concerts in different cities and countries, with a varied repertoire. How do you combine your life as members of the Camerata as well as members of the Royal Concertgebouw Orchestra?

Well, of course the orchestra is our main priority, it has to be. Without the orchestra the ensemble is nothing more than just an ensemble.

We schedule Camerata RCO around the schedule of the orchestra, which means there is basically not a lot of free time left. We have a family and therefore the afternoons are free. All evenings are covered with concerts or rehearsals. It’s a lot of playing but we love it so it gives us positive energy.

You have made four recordings for Gutman records which include music by Corelli, Mozart, Mendelssohn, Ravel and Mahler. Which aspect would you highlight in the musical style of each of them?

The Mendelssohn pieces are very rarely played and we find them very enjoyous. Also the instrumentation of string quintet and clarinet and basset horn is original. You don’t see that very often.

When we decided to record the one movement piece, Allegro of Mozart for string quartet and clarinet, somebody advised us to record the traditional clarinet quintet as well. “You have to” he said.

Your latest cd, Mahler 9, is an arrangement by Klaus Simon for chamber ensemble under the direction of Gustavo Gimeno, which was released in September this year. What makes this new reading different?

The arrangement of course is for 16 players instead of almost 110 in the orchestra. There are a lot of instruments missing and Klaus Simon arranged it so that the music is still there. Trombone parts are in the accordion. Harp is often done by the piano. It is very different.

In the tradition of Schönberg’s Verein fur Musikalische Privatauffuhrungen I think it is true that it gives a cleaner look to the piece. Of course Mahler 9 is a giant work of music and sometimes when there is a full orchestra something might be missed. In the ensemble version it is simpler, at the same time more compact as well. I don’t say it is better than the original of course, but I think it is very interesting. For me personally, as a second violin, I found it incredibly intense to play as a solo second violin throughout the symphony. I got to know a whole new piece.

We have a lot of ideas and try to canalize all in a schedule that is challenging and still fun.

We enjoy all different settings for the ensemble. The Mahler symphonies in the smaller versions like we play in the Auditorio in Madrid on November 21st is one aspect. We also really enjoy playing chamber music in a living room, like we will do in Music above the Park on November 22nd.

Thank you very much. We look forward to listening and enjoying your music very shortly. We wish you and a pleasant journey to Madrid.