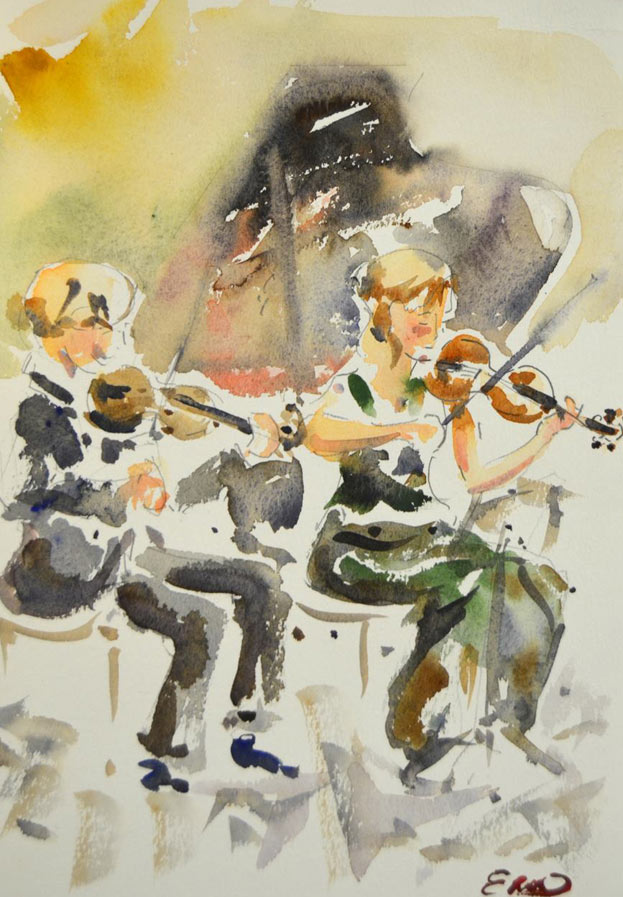 There are, sadly, few employments in which individuals are happy with what are they doing. The second violin of Camerata Royal Concertgebouw Orchestra, Annebeth Webb, surprised us in our last issue with her magnificent headline: “It’s a lot of playing but we love it, it gives us positive energy”. With more than forty concerts programmed for the next season only with Camerata, the first violin, Marc Daniel van Biemen is full of this energy too, as the rest of the company, willing to transmit it to the audience, even through the tiniest details, such as his particular shoes. The venue, Music Above the Park, is the perfect location to this kind of happy “Schubertiades” to be held, art included. It adapts perfectly to the philosophy that this group of friends and musicians one doesn’t know which of these two words should be put first wants to communicate.

In classical music, you always try to reach as people as you can, but I think you have to be realistic about the people you can reach and the people you cannot. We can’t touch people who like pop music or, I don’t know, heavy metal! Well heavy metal people usually like classical music! [Laughs]. But what most people forget is that there are lots of young people interested in classical music as well. Everybody thinks “oh, it’s only old people who like classical music”, and it’s not. And there’s a lot of importance in the way you present classical music. You can be on stage like this [Marc puts his most unexpressive face], and you don’t have any visual appeal. And I think in Camerata we try to care about all this, even about the tiniest details: strange shoes [he looks with complicity his own pair] or something. People enjoy seeing some visual qualities, and that’s great. I always have people coming at the end of the concert who say: “We loved the way you interacted with people”. And I think to myself, “that’s normal”! But is not, and I think we have this visual effect that people like. Even in the orchestra I do my thing, I love making music, so I would never never let anybody tell me I cannot move. I am a musician and I make music.

This is one of the reasons I prefer playing in small rooms as Music Above the Park’s and I think many people too. That’s not a big stage where everybody is sitting down and looking up. Here you’re at the same level, really up close, really near, really seeing all the little details. That is the beauty of chamber. The name itself, chamber, means “small room”.

We didn’t know yet, but minutes later we would hear even the breath of each member of this particular crew, as if their instruments were alive too The composers who were revisited, and revived, were Verdi with an almost unknown and unique quartet and Mozart, with his bright quintet for clarinet and strings. The previous day they visited in the Auditorio Nacional of Madrid, presenting their new CD with music by Mahler, but in a different way.

Yesterday we played Mahler, and we had a conductor. The funny thing is that if the conductor is very good it can be an amazing concert, but if he is not so good it can really ruin it. When the conductor has a broad view of the piece that is being played, then he can really give you the inspiration to make the best possible music. With great conductors that is a big, amazing feeling. There is a person standing there and you feel that you want to give everything to this man. It’s worse when a conductor thinks that he is more important than the music, like a diva, he is not taking into account that he is working with musicians who want to express themselves as well. If you are not allowed to express yourself then you are under a very bad conductor.

So we like to work as much as possible without the figure of the conductor because you feel yourself with more freedom , with him you have to force to feel as the conductor feels. When we work with conductors we tend to work with ones who allow us the freedom to do what we want. We don’t like dictators telling us what to do. We are all very free in the way we play, in the Camerata we are not dictators to each other: “You cannot do that, no, better do that thing here”. Never a concert is the same. That’s important, that you don’t keep stuck in the same monotonous things. Tonight, for instance, is something that we have never done before.

You can feel this by listening to their performance, as we saw afterwards. Not only the complicity in their glances, but also in the concert itself, in which their heart beats were synchronized, but expressing themselves with a different timbre, different voices speaking among them. The dialogue was clearer in Mozart, and a concentrated introspection in Verdi. And the strange thing is that they were not distracted by their shared daily routine. This night what they only wanted to talk about was music.

The nice thing about Camerata is that we are all friends, we hang out, go out and eating, and go on holidays, as well as playing music. So all that variety in the group’s activity is really great. And we always have fun making music, whatever it is. Having fun is the most important thing. If you are in a big orchestra, as we are sometimes, and you feel like, “Oh, god, I’ve got a rehearsal!”, that is not a very good sign. But with Camerata we are always excited, especially if we travel.

There are places where the people are incredibly quiet, and places where people cough during the music, and even talk. Last year with the big orchestra we made a worldwide tour, through six continents in one year, everywhere from Australia to China. We lived very special moments. For example, we did a concert in New York and after the concert every person in the audience came by to shake our hands. We were standing in line and everyone came to say “thank you very much, we enjoyed your concert so much!”. And that is very special, it’s something that doesn’t happen very often.

We tried to image a lot of ears from different races listening to similar chords we were going to hear this night. Also their eyes, with an intense brightness and movement, due to the excitement this group keeps transmitting all over these different places.

The audience can be very important, and you can tell when they are really focused. It is our duty to make them like it, so is definitely a combination of factors: it is our responsibility to make people love what we do, but the audience also has to give us something. The public paid the price to hear you perform, and it is very annoying to see people sitting there as if nothing is happening. But our job is also to transmit the positive energy, and making music for the audience. Even if we play things that we don’t enjoy, I think it is important to make it even more enjoyable.

In Madrid we had a nice experience. We did a rehearsal in the conservatory, an open rehearsal, and there were a lot of people, young students who came. It was lovely. You can see the eagerness in young musicians’ eyes when they see people who perform very well. As a student, I used to be like that, and now I can give it back. I was really happy to see so many enthusiastic young musicians.

The atmosphere in conservatories is sometimes difficult. It depends on what kind of teacher you have. I did few years of conservatory and I didn’t really enjoy that much. Then I went to do my master in USA. There were some things great about the conservatory, but some not that great. It is the same in other places, I mean, would you send your children to university? Yes, of course, you want them to get the best of something. If I had to decide, it would be the following: if you have a child who is very talented, of course you should send him there, because he is surrounded by music, by everything. That’s the reason conservatories exist, you really are in this environment, you learn from each other. There is always jealousy as well, but it is everywhere in life. Even if you are in the street and a you see some beautiful cloths, you say “Damn it, I want that!”. There is always competition.

And then the conversation leads towards the variety of music which was or will be in Marc’s hands, beginning by Baroque and authenticity.

You have to be very, very devoted to this kind of music. But for us when we play Baroque it is because we really enjoy the piece, not because we definitely want to perform it in an authentic way. For me personally I prefer the romantic repertoire, it fits better with my style playing, but I have a lot of respect towards baroque musicians who do it authentically, it is very exciting! In the way you approach different kinds of music, you try to honour them with your performance, your feelings, you add something of your own musicality. The other line is to respect the score. I mean, of course, when you play Baroque you make less vibrato, the phrasing of the music is different, those kind of things. If you’ve been well-trained you know how to approach to it.

Personally I am very scared, for example, to play jazz, because there are so many great musicians out there, and I don’t see why I should try it. I was trained in a very classical way, so it is very difficult for me to perform a kind of music so different to the music I play. For instance, I play electronic music and I enjoy listening to it. I’ve tried a few times to do a little bit of improvisation with electronic music. But jazz is a different thing. You have to be very well-trained to get the jazz sound like jazz, unless you are multi-talented.

As if we were in a salon, the people start to fill the room, chatting cheerfully. The shadow of concentration gets to the now more serious face of Marc.

For me this is what I want to do, play all over the world, for great people. For the moment I think we are all doing what we love. Next season we have 40 concerts with Camerata, outside the main orchestra season, we’ll be busy! [Laughs]. Tomorrow we flight back and then we start rehearsals again with the Orchestra. We’ll be playing next week the Mozart string quintet, we will record by the next year. We have a lot of projects!

Hands on, let’s the music sound.