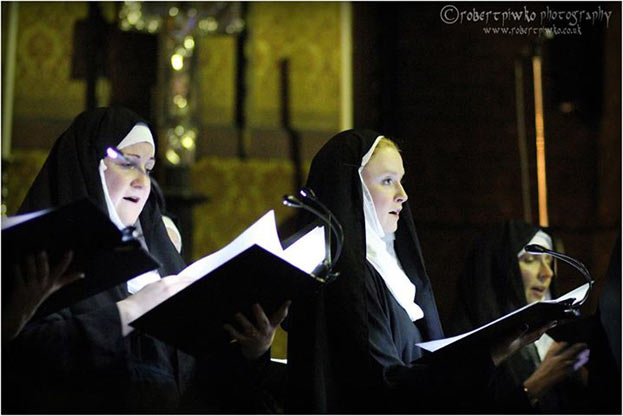 Such words by Cortázar show how pictures and dreams of something that was real always remain. Goddeses’ figures in the shadows, creators in the past, always leave their mark on history, albeit in a way not recognized. Cortázar’s golem is the only thing we have left, appeared through the revival of music, formerly buried in manuscripts. That Feminarum miracula of ancient artists is reflected in concerts as those of last Saturday in Brighton Early Music Festival.

Being colleagues in harpsichord study at the Royal College of Music, Carole Cerasi and Laurie Stras coincided in time and place in the maritime city of Brighton’s enclave. If the first concert took place in a very intimate and cozy atmosphere for the audience in the Friends’s Meeting House, the opposite was the case for Musica Secreta‘s concert, which took place at the huge St Bartholomew’s Church. As the Festival subtitle hints, both concerts were focused on music of two important women in the history of music: Elisabeth Jacquet de La Guerre and Leonora d’Este (Lucrezia Borgia’s daughter).

The first of these also starred Jacques Duphly, well introduced by the harpsichordist as a master of refined harpsichord character pieces. The Portrait in Sound, concert’s title, refers to a long-standing practice of French clavecinistes that influenced these two great composers. La Cazamajor, Médée and La Forqueray stood out among the rest as truly virtuosistic and in a classic style that mimics Couperin for a while. That virtuosity made Cerasi sometimes mistaken in some contrapuntal sections, but it was superfluous compared to the lushness and sensitivity of the other parts. The first pieces, Allemande and Courante, and the last one, Chaconne, of the French composer have a majestic pace regarding its French-style dotted notation. She also showed a rather romantic gesture, but she played with clear expression of all voices in La Guerre’s pieces. In her first publication, Un livre de pièces de clavessin, we saw the displays of virtuosity, though not as melodic as Duphly. However, La Guerre has a dazzling contrapuntal development on Sarabande and Chaconne. Music was welcomed by a respectful audience, and Carole was warmly acclaimed at the end of the concert, without leaving a piece for dessert.

After a walk in Brighton Beach, and after a short downpour, I came to St Bartholomew’s Church, a neo-gothic building with disproportionate dimensions that people compares it to Noah’s Ark. A great concert was interpreted by three groupings: Musica Secreta, a professional group specialised on early modern women music, as Laurie Stras and Deborah Roberts as directors (last one is artistic director of BREMF, as well), Celestial Sirens, an amateur and student women’s voice choir exploring convent’s music from around the 16th and 17th centuries, and Brighton Festival Youth Choir ,group which since 2002 has become one of the leading youth choirs in the UK. The combination of these three ingredients could only give an extraordinary result. If we add up the fact that the repertoire to perform is likely from an important princess and nun in the Court of Ferrara, but largely unknown as a composer, things become rather more interesting.

Starting with three 15th century Laude settings and with the treble choir on stage, we saw the Celestial Sirens in front of the altar (on the right hand side of the audience) with a set of lights that gives a tenebrous touch. In addition, the moving of the entire choir, dressed in nun’s habit and singing at the same time, throughout the church until they reached the stage transported the listener to a private sphere and an ancient time. Some mismatches in musical entries were produced by the spaciousness and the regular acoustic conditions of the church.

The interesting part of the concert came with the anonymous pieces performed, which brings a lengthy investigation carried out by Laurie Stras. The Musica quinque vocum motteta maternal lingua vocata book, printed in 1543 by Girolamo Scoto, contains anonymous motets clearly intended for nuns’ use. “Book’s music suggests that its composer had access to the music composed by musicians in the Ferrarese ducal chapel”, as Laurie Stras has pointed out. The princess Suor Leonora, Duke Alfonso I de Ferrara’s and Lucrezia Borgia’s Daughter, may have been the composer of these motets for various reasons which the researcher gives, including the fact that she was living close to a musical environment. But, because of her condition of nun, besides princess, it would be unseemly if she signed the pieces. This concert tribute her 500th anniversary of her birth, and tries to claim the relevance of his personality in the Clarissan convent of Corpus Domini in Ferrara and her context.

Music of the rest of composers performed was related to Suor Leonora’s context, like Francesco della Viola as her nephew’s maestro di capella. The balance between the singing voices and clear text direction showed the skills and expressiveness of a group already enshrined. Audience, framed in a sacred scope, realized the quality of the music and some of them realized the incredible dissonances at certain times causing beauty in Salve sponsa Dei and in Haec dies. This piece was performed in the high part of the church by the soloists, being difficult to appreciate the extraordinary sounds. Knowledge of the imitative technique was clear on Ego sum panis vitae and homophonic parts during O beatae Christe confessor and Angeli, Archangeli, Troni overwhelmed the audience. Despite various attempts to introduce the voices in Rore’s O cruz benedicta, the piece was beautifully sung and well balanced between voices.

We also listened to instrumental pieces wisely performed by Alison Kinder (viol.) and Claire Williams (organ); the same instruments in unison made tenor voice in motets. Brighton Festival Youth Choir was surprisingly good, with a clear and round sound, accustomed to strident treble choirs.

The sum of the two performances gives the Festival a major prestige, as the following groups as Courtiers of Grace, The Orlando Consort, The London Handel Players or the production of La liberazione di Ruggiero dall’isola di Alcina by Francesca Caccini and with BREMF Renaissance Players. Now Musica Secreta is full of gorgeous projects including carrying out the CD recording of the materna lingua motets, which you can support through their crowdfunding campaign. Hopefully these projects continue with the aim to discover the image of women completely buried by the historiography and the circumstances. Then we can see the feminarum miracula or the golem which still sobs us in dreams and oblivion.