A Map to Revisit the Warsaw of Chopin’s Youth 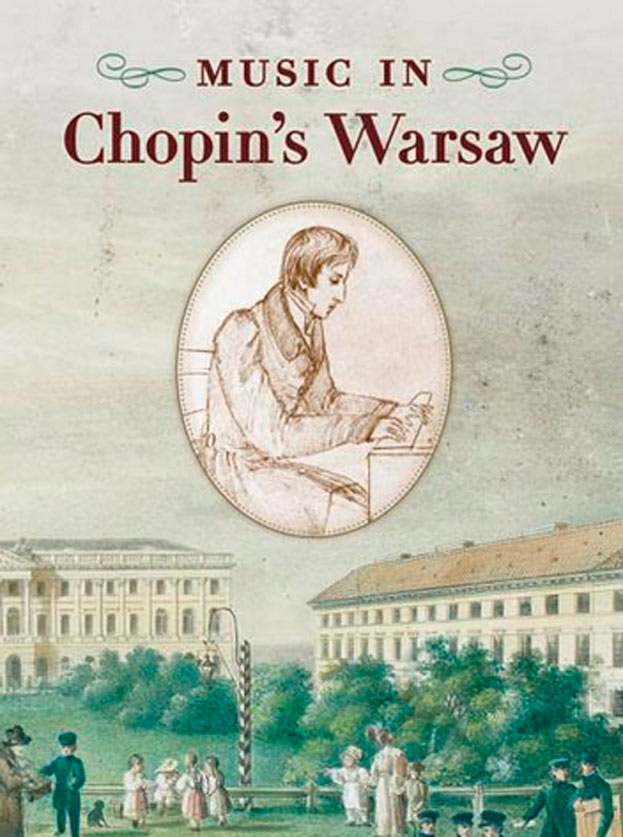 Chopin is one of those few composers whose biography fascinates in equal measure to his music. As a consequence there has been no shortfall in literature dedicated to various points of his life from Liszt’s Chopin (1850) right to the present date. It may therefore sound surprising that Halina Goldberg’s opening sentence remarks: ‘Among the many works devoted to Fryderyk Chopin, none fully addresses the musical environment in which the composer spent his formative years’ (p. 3). Goldberg calls to attention Jim Samson’s Chopin (New York, Schirmer Books, 1997) and Frederick Niecks’s Frederick Chopin as a Man and Musician (1888) as making basic and flawed attempts to investigate some aspects of Chopin’s childhood, and concludes that aside from the Polish Warsaw of Chopin’s Youth [Mlodosc Chopina] (Kraków, Polskie Wydawnictwo Muzyczne, 1961) by Tadeusz Fraczyk which has inspired scholarly research, it is still very much an open field. Interestingly, Adam Zamoyski’s two biographies published in both English and Polish, which can be said to try and capture something of Chopin’s youth in a way that was meant to appeal to a wide audience, are not mentioned by Goldberg in her literature review: Chopin: a Life (London, Collins, 1979) and the expanded version, Chopin: Prince of the Romantics (New York, Harper Press, 2011).

How does Goldberg see herself in relation to the substantial Chopin literary-tradition? By limiting herself to the investigation of musical life in Warsaw at the time of Chopin’s development, the depth which Goldberg is able to bring to this survey gives her the freedom to break free from the apologetic tone that marks other writers grappling with this period of the composer’s development. Goldberg’s findings are based on years of research with various chapters building on articles such as ‘Chopin in Warsaw’s Salons’, Polish Music Journal 2 (Summer 1999), ‘Chamber Arrangements of Chopin’s Concert Works’, Journal of Musicology 19 (2002), as well as her own doctoral thesis, Musical Life in Warsaw during Chopin’s Youth, 1810  1830 (City University of New York, 1997). The rigour of this study, and Goldberg’s conviction as to its necessity is clear when she writes: ‘Had Chopin been born a decade earlier or a decade later, the capital [Warsaw], devastated by warfare and striped of all cultural establishments, could not have provided support for [Chopin’s] talent. The young composer would have been compelled to seek musical education abroad and thus would have been deprived of the specifically Polish experience so central to his musical style’ (p. 5).

Music in Chopin’s Warsaw unfolds over eight chapters, each focusing on a different aspect to the culture, activities and individuals which helped to mould the distinct identity of Poland’s most celebrated composer. Goldberg starts with a broad view which challenges many assumptions of Polishness. The first chapter, ‘Historical and Cultural Background’, confronts the reader with the fact that by 1795, just fifteen years prior to Chopin’s birth, Poland had lost its name on the map of Europe  a fate that would last for the following century. As well as documenting the oppression and censorship which Poles faced at the hands of the Prussians, Austrians, French and Russians, Goldberg presents this circumstance as a contributing factor to Poland’s multicultural identity. For the ‘generation of stateless Poles beginning with Chopin’ (p. 14) this multicultural environment gave them the opportunity to redefine their own identity with influences from the West. Goldberg explores the ‘young intelligentsia [engaging] with Dante [] Shakespeare [] Goethe, Schiller, Byron [] Sir Walter Scott [] Herder and Schelling’ as being instrumental to planting the ‘seeds of Romanticism’ into Chopin’s generation (p. 19). Goldberg makes a convincing case to demonstrate that the oscillation between the Classicism of old Poland, and its new Romantic generation, a balance reflected in Chopin’s own works, was indeed unique to the years of the composer’s youth.

The second chapter, ‘Instrument Production’, and the third, ‘Music Publishing’, offer a view of Warsaw as a thriving and industrially significant city. Goldberg argues that ‘Polish artisans were abreast of the newest inventions from abroad, and did not hesitate to experiment on their own’ (p. 31), and thus discusses the string and wind instrument markets and workshops to demonstrate this point. Speaking about keyboard instruments, she investigates not only of the kinds of pianos available and preferred by Chopin  dispelling the myth that Chopin had to wait until he got to Paris to come into contact with a superior instrument  but also discusses at length Chopin’s experience with various organs and pedal pianos. With regards to music publishing Goldberg notes that although Chopin’s music was mostly published outside Poland, the voracious appetite of Warsaw for music-making turned music bookstores into ‘a font of musical knowledge’ (p. 54). In catering for the functional, as well as intellectual, aspects to Warsaw’s musical scene, Goldberg suggests that music publishers would have been an important way for Chopin to appropriate the language of the social dances (polonaise, waltz, krakowiak, mazur) which pervaded Polish society at the time. Likewise, Goldberg considers the importance of the publication of chamber music genres and vocal music on Chopin’s development and experiences.

In ‘Musical Education’, the fourth chapter, Goldberg investigates Chopin’s time at the Warsaw Conservatory with particular emphasis on the tuition of Jozef Elsner. The chapter gives Goldberg the opportunity to give an in-depth analysis of some of Elsner’s own aesthetics and beliefs and the extent to which Chopin can be seen to adopt his principles and tastes. Goldberg equally tackles the question of how Chopin’s earlier musical works, yet to find their distinct freedom of expression in form and harmonic language, were at once indebted to the disciplines he encountered in his education as well as desiring to break free. Surveying the non-musical lectures which Chopin would have attended, Goldberg turns to the investigation of how the new Romantic generation sought to create a Polish identity for themselves. Aside from the specifically ‘Polish’ aspects to this identity, linked for example by language, she highlights this preoccupation with the idea of the Slav and with a ‘spiritually united Slavdom’ (p. 138)  ideas no less vital for Chopin but often overshadowed in the presentation of him as an oppressed and nationalistic Pole.

The remaining chapters  ‘Salons: Background and Intellectual Trends’, ‘Music in Salons’, ‘Musical Theater’ and ‘Concert Life’  are detailed accounts of the kind of concerts which Chopin would have attended and in which he participated. Goldberg is particularly anxious to challenge the stereotype of the salon and the amateur musician in Chopin’s Warsaw. This section of the work explains in considerable detail how the salon was ‘a forum for and exchange  artistic and intellectual’ (p. 161) which hosted some of the greatest minds on the time, and the hosts themselves were highly erudite individuals capable of contributing at the highest level to the evolution of Warsaw’s aesthetics and tastes. ‘Musical Theatre’ questions how much of Chopin’s ideology can be traced to the Polish desire to express their national identity through the opera genre and how despite the high hopes that Chopin would become an important contributor to such a project, his ideals would ultimately find their outlet exclusively through the piano. In ‘Concert Life’, Goldberg offers the provocative notion that Chopin ‘was not the only Wunderkind admired in Warsaw, nor was he the most revered one’ (p. 275). Thus, Goldberg is able to argue the case that there was an immense pressure in Warsaw for success in an established virtuoso tradition. Within this context Goldberg discusses the importance of stile brilliant, the piano concerto and improvisation  elements which are synonymous with Chopin’s persona and often attributed to the glittering Parisian concert life rather than to his Warsaw years.

Goldberg’s narrative does not aim to belittle Chopin’s development outside Warsaw. She is frank when she concludes that ‘in his new home [Paris] he was able to hear the most splendid performers and compositions’ (p. 297).

But what Music in Chopin’s Warsaw shows, is that the myth of Chopin somehow finding his feet outside the oppressive confines of his homeland needs to be challenged  that when we think of Chopin as Poland’s first spiritual voice, weiszsz, we must be ready to acknowledge him as a voice for the collective endeavours of the Warsaw of his youth.